Hi! Can’t wait for this event and to meet other civic technologists. This is something relevant I wrote from some work I did with Local Trust in the UK: https://medium.com/digitalfund/communities-essential-guide-to-digital-tools-for-mutual-aid-groups-c1664d30b525 currently working on the community toolkit based on ethical tech instead (incase anyone wants to chat about this) and it’s also what led to the creation of https://dontgobacktonormal.world/!

what led to the creation of https://dontgobacktonormal.world/ !

I see the potential for cross-pollination of this list and the projects curated by Civic Tech Sweden. There is very little overlap between the two. For example, you could add these ride-sharing and decentralized public transport projects to your list @phoebe: 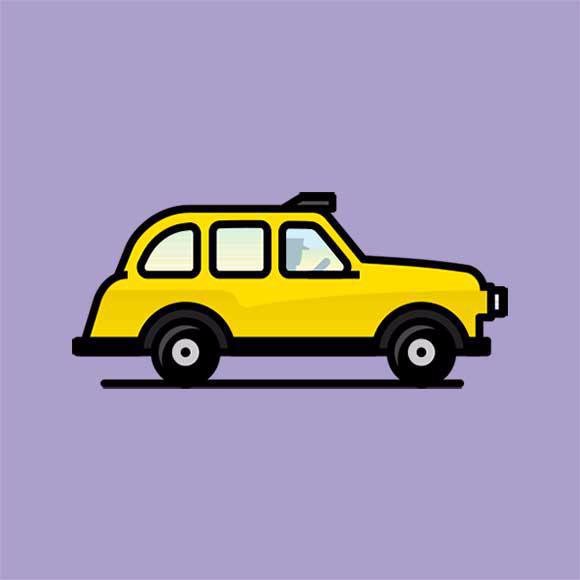 And it just so happens that @mattiasjay is the go-to-guy on open-source ridesharing!

currently working on the community toolkit based on ethical tech instead (incase anyone wants to chat about this) and it’s also what led to the creation of https://dontgobacktonormal.world/

Glad to have you with us @phoebe! + thanks for the cross-pollination suggestion @hugi!

dontgobacktonormal.world! The page has such a good and educational way of explaining things: “do x differently”. We need this in Swedish, maybe as a merge with onboarding into civic tech as we talked about on the fikas @pernillan?

Francesca Pick is joining as a special guest!

For those of you who don’t know Francesca, she has been key in building up communities such as Enspiral and Ouishare.

I’m updating the main text above about Francesca and you can see videos and more at https://www.francescapick.com/

You’re making really difficult to not participate @mattiasjay , if not impossible

Oh well, now I know what I’ll be doing on the morning of 23rd…

Hope to see you both today, next Friday and on the 23rd!

Nice @mattias! I’m sitting here with the JAK magazine next to me (Grus & Guld). What forum are they running on https://jakmedlem.se/login ? Is it Discourse?

. OK. It’s members of JAK running that inofficial forum. Yes it is Discourse. Officially the bank pays for proprietary platform Kundo which is not a proper forum but rather more like a pre-moderated FAQ in which the organization can filter out questions they find unsuitable: https://forum.jak.se/org/jakforum/ which is also used by SR.se https://kundo.se/org/sverigesradio/ and skb.org https://fraga.skb.org/org/skb/.

Have you registered on Eventbrite? If not, register with a shipping address before Friday and you will get chocolate and stickers in the mail! 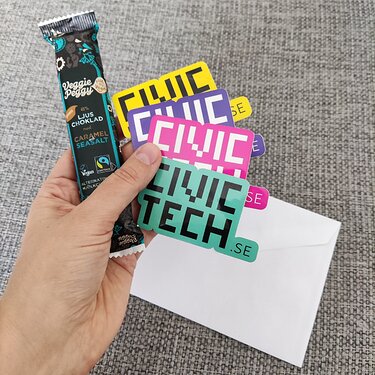 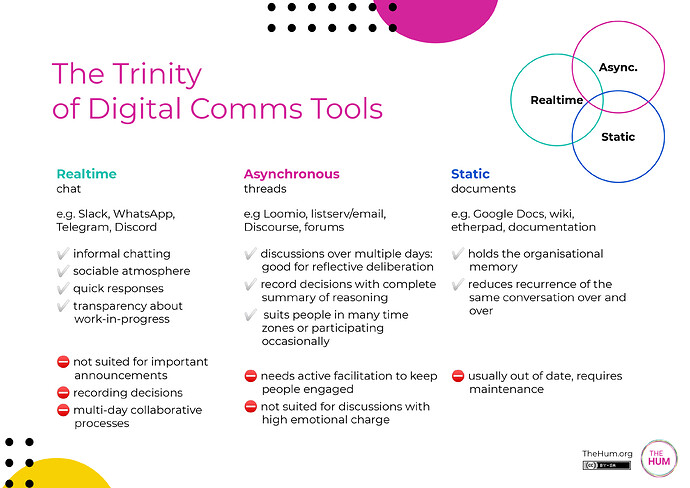 Next week we will look at how “the trinity of digital comms tools” can be used together!

When we are new to tools like this we can understand them by making parallels to what we already do face to face.

For instance, Swedish non-profit organisations are world champions of meeting face to face and having a “fika”. A fika is a break with something to drink (often coffee) and often a pastry. The fika can have the function of an informal meeting, which we find the parallel to in the “Realtime” section of the picture. The digital chat is just like the fika informal and has a sociable atmosphere. As you see above in the thread we have digital realtime fikas for Civic Tech Sweden on Fridays.

Non-profits also do a lot of collaborative decision-making, when we talk about things we want to do and add on each other’s thoughts. Common practise is to combine thinking by yourself, reflecting in a smaller group and bringing reflections to a larger group. These things are not simultaneous (that would be chaotic). The parallel in the picture are “Asynchronous tools”. Trying asynchronous tools such as the digital forum you’re in right now is a great practice during the pandemic so it can be weaved into the face to face practices when we get back to that.

Lastly, documents. Documents are “the organisational memory”, as stated in the picture. This part is probably what most non-profits already have digitized. But are the documents accessible and part of a collective memory, or locked away? To make parallels again; remember the small physical and collaborative libraries some non-profits still have? Imagine that, as a digital tool.

Next week we will look closer at all of this, and how to use the tools based on what you’re doing. Maybe the fika is not the same place as where you make decisions?

Thanks to The Hum for the picture.

This event might be interesting to people attending our lab: Tactical Tech organises a digital workshop on Personal Data and Working in a Community on 26 February 2021 10:00-12:00 (UTC+1). Read more and register on https://rewritingthefuture.org/schedule/personal-data-and-your-practice/

87 participants have signed up for tomorrow!

Also, @petter from Collective Tools is joining us and will tell you how they can help you.

There’s room for 100 participants tomorrow, so there’s still time to sign up or invite a friend or colleague. Sign up here: https://www.eventbrite.se/e/civic-tech-lab-community-tools-tickets-140276682333

In my session, I will be showing you things on a Miro board. You can follow along here:

Hi, what is the code to enter MetroRetro?

Hi , could not attend the meetup… Is there a video recording or summary I can check out ?

Hi @angylp! We didn’t record the event unfortunately, but we will write a summary! Can ping you when we publish it!

Hi Pernilla, I was unfortunately also unable to attend the event but would love to see a summary, so feel free to ping me as well, if you don’t mind. Thank you!

Thanks everyone who were able to participate in the lab!!! And to those of you who missed it… we missed you too! We will soon publish a summary of the event on our blog, but for now, here are some links that was shared during the event by the speakers and in the chat.

I have tried to categorise the tools mentioned according to “The Trinity of Digital Comms Tools” from https://www.thehum.org as mentioned above and presented during the lab.

Here I have tried to list them in a rough order of most secure, privacy friendly and open, to least, but please research a bit about the security of messaging apps before you pick one…

For audio chats, these two were also mentioned, but not so sure about their security, except that you should be careful with Clubhouse… (You can read more about Clubhouse and integrity in Swedish here)

Tools for finding a meeting time

There were a lot of good conversations in the chat. Even if the lab was about tools you guys also had suggestions on teambuilding excercises. Maybe this can be inspiration for a future lab? Here’s what you wrote:

Reflections on the Community Tools Lab